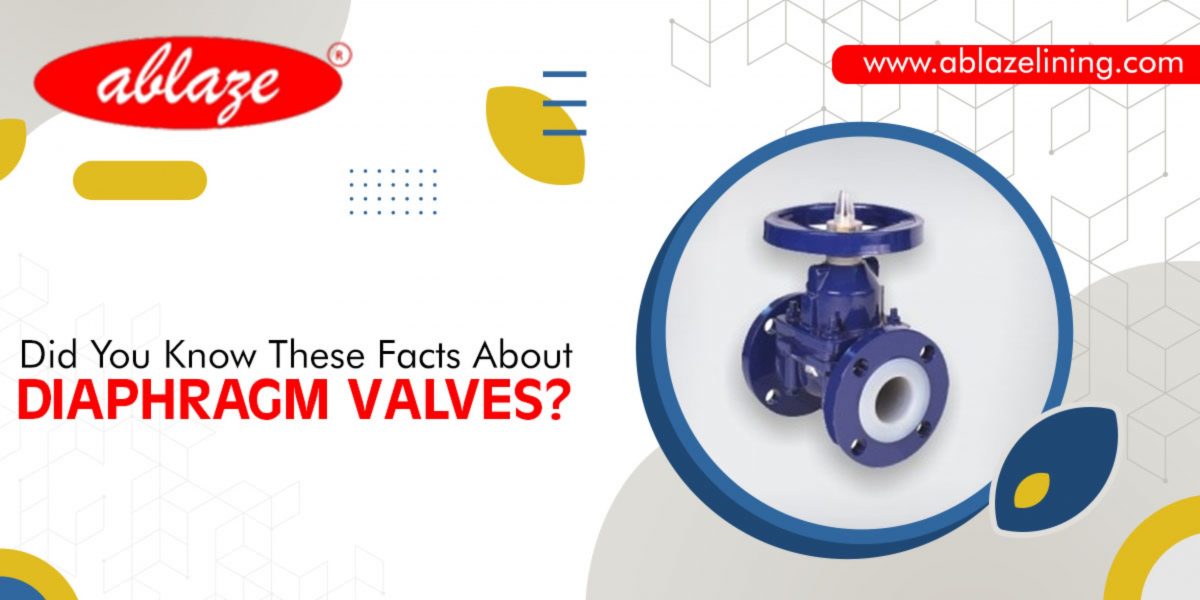 Diaphragm valves are so named because a flexible disc forms a seal when it presses against a seat located at the top of the valve body. Diaphragms are pressure-sensitive flexible elements used to control valve opening and closing. Comparable to pinch valves, diaphragm valves isolate the flow from the closing element by means of a flexible membrane instead of a liner.

The diaphragm of a diaphragm valve manufactured by the most popular as well as leading Diaphragm Valve supplier in Anand is flexible, and it is attached to a compressor by a stud that is part of the diaphragm’s design. To produce shut-off, the diaphragm is pressed against the bottom of the valve body rather than the liner being pinched closed. Because of their exact and variable opening, manual diaphragm valves are highly effective flow regulators. To adjust the flow rate of the system’s media, a handwheel is rotated. The flow is stopped or started by turning the handwheel until the diaphragm lifts off the bottom of the valve body, respectively.

The function of the Diaphragm Valve:

The best quality Diaphragm valves manufactured by the excellent as well as remarkable manufacturer and supplier of Diaphragm Valve in Gandhinagar can be fitted in any orientation and are ideal for regulating the flow of fluids that may contain suspended solids. Weir-type diaphragm valves are superior to straight-through diaphragm valves for throttling due to the design’s huge shutdown region along with the seat, which gives the valve the characteristics of a quick-opening valve.

Types of the diaphragm valve:

A diaphragm valve can be either a weir type or a straight-through type. The two valves share a similar design but the body and diaphragm don’t.

When it comes to harsh corrosive and abrasive services, as well as general use applications, the weir-type diaphragm valve design is the most preferred type of valve. When utilised to regulate low-volume flows, they excel. The diaphragm contacts the body of the weir type, which has a raised lip. To save space, the diaphragm in weir-type valves is shorter. The valve can be utilised in both high-pressure and vacuum applications, and the heavier material allows for both. The weir is split in two for the compressor. When the valve is opened, just the central portion of the diaphragm lifts off the weir because the initial increase in the stem travel tends to raise the component of an inner compressor to generate a relatively tiny opening through the centre of the valve.

To access the additional throttling, the inner compressor must first be opened, at which point the outside compressor piece is lifted in tandem with the inner compressor. When working with hazardous liquids or gases, weir-type bodies with bonnet assemblies are preferred because they contain the hazardous elements and prevent them from escaping in the event of a diaphragm failure. Their self-draining bodies make them ideal for use in the food processing industry. Ablaze Lining is the most prevalent as well as a noted Diaphragm Valve supplier in Anand, Gujarat offering a world-class range of diaphragm valves.

This type can be utilised when the system’s internal flow direction changes. This configuration’s body has a flat bottom that runs perpendicular to the direction of flow. This ensures that there are no significant impediments to the flow as it passes through the valve. The diaphragm needs to be made of a pliable material so that the machine can access the valve body’s base, but this can reduce the diaphragm’s durability. They work quite well with sludge, slurries, and similar viscous fluids but struggle with higher temperatures.

Many different substances can be used to construct diaphragms. Material selection is determined by the properties of the material being handled as well as the operating conditions (such as temperature, pressure, and how often the machine is run). High-temperature and chemical resistance are two of the many advantages of elastomeric diaphragm materials. Higher temperatures (above 150°F) however, will reduce the mechanical characteristics of elastomeric materials. Furthermore, the diaphragm can be damaged by intense pressure. The diaphragm’s performance may also be affected by the relative density of the media it must process. There may be a concentration and/or temperature at which the material’s resistance to corrosion is adequate.